A brief history of the Hospital 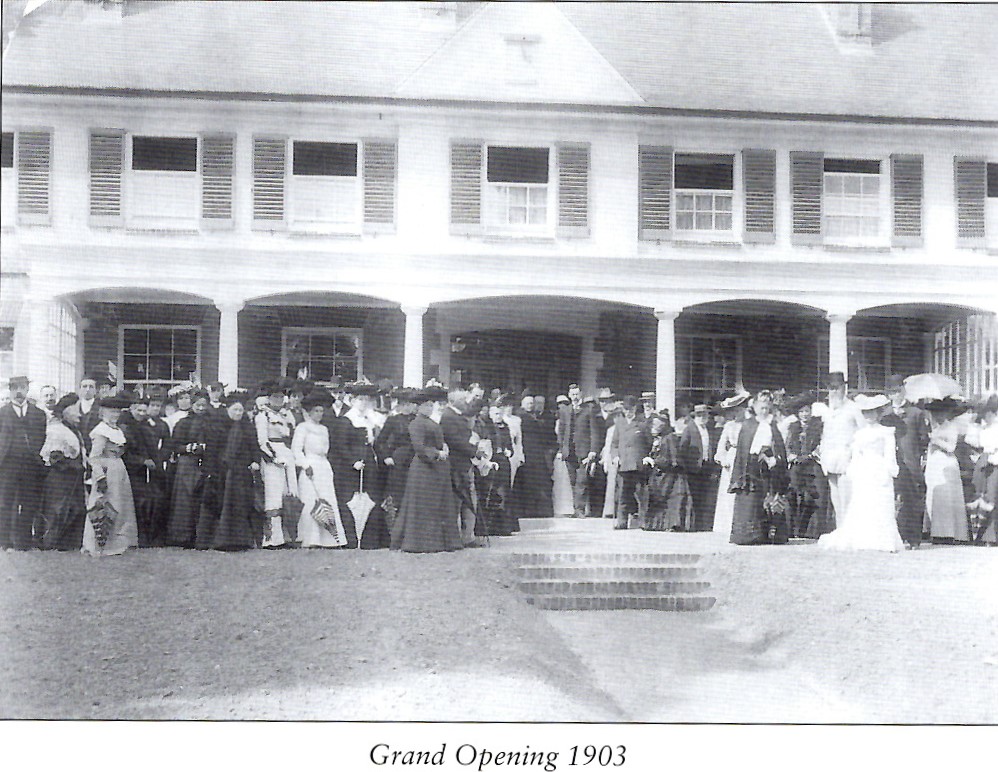 Exmouth’s first hospital, The Maud Hospital, was founded in 1885 at 5 Clarence Road by local benefactor Mrs Charlotte Hume Long, who was also the Matron, and ran it with the help of Dr G Willoughby. The facilities were much used but totally inadequate, so in 1886 Mrs Hume Long bought Belmont House at the top of Bicton Street and converted it into a nine bedded hospital.

Following the death of Mrs Hume Long in 1899, The Maud Hospital was handed over to a committee to manage for the benefit of the town with her son, the Rt Hon Walter Long, as president and two principal local landowners, the Rt Hon Mark Rolle and Sir John Phear, as vice presidents. In 1902, this hospital was found to be inadequate for the needs of the town and following a public appeal the current hospital site was identified near Ryll Crest. On Wednesday September 3rd 1902, Lady Gertrude Rolle laid the foundation stone of the new buildings with a silver trowel supplied by Exmouth jeweller Edmund Boyce. The new 14 bed hospital was built by local contractor B. Hayman of Church Street and cost £4400. It was  renamed Exmouth Cottage Hospital and was opened by Lady Gertrude Rolle on Saturday June 27th 1903. 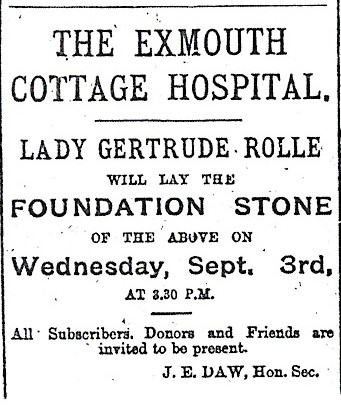 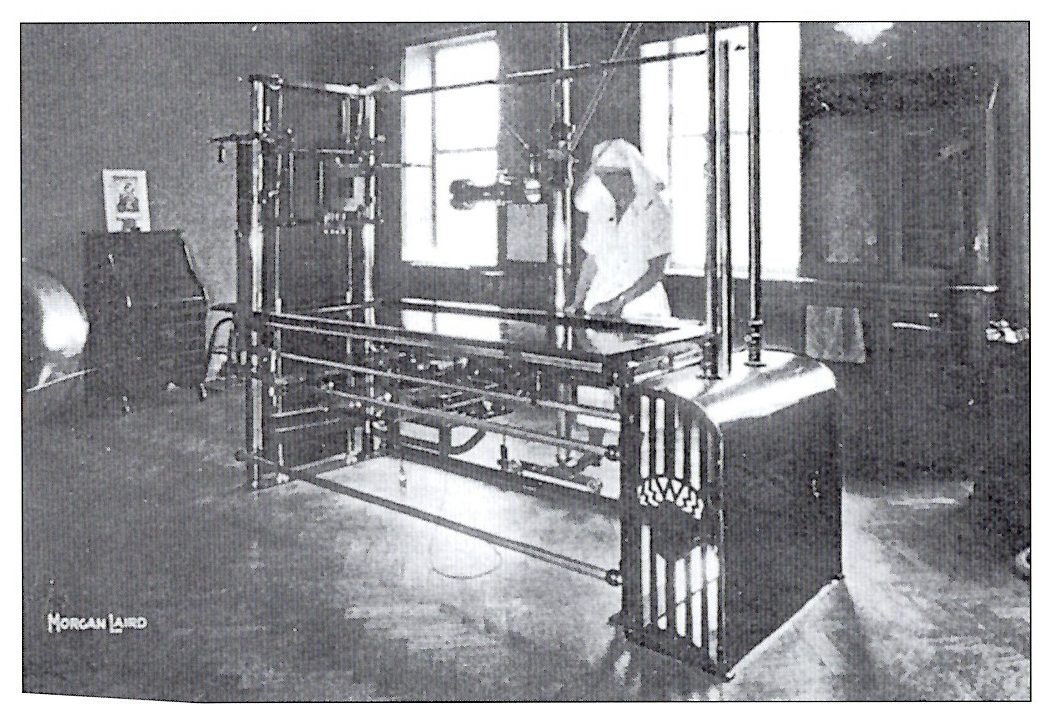 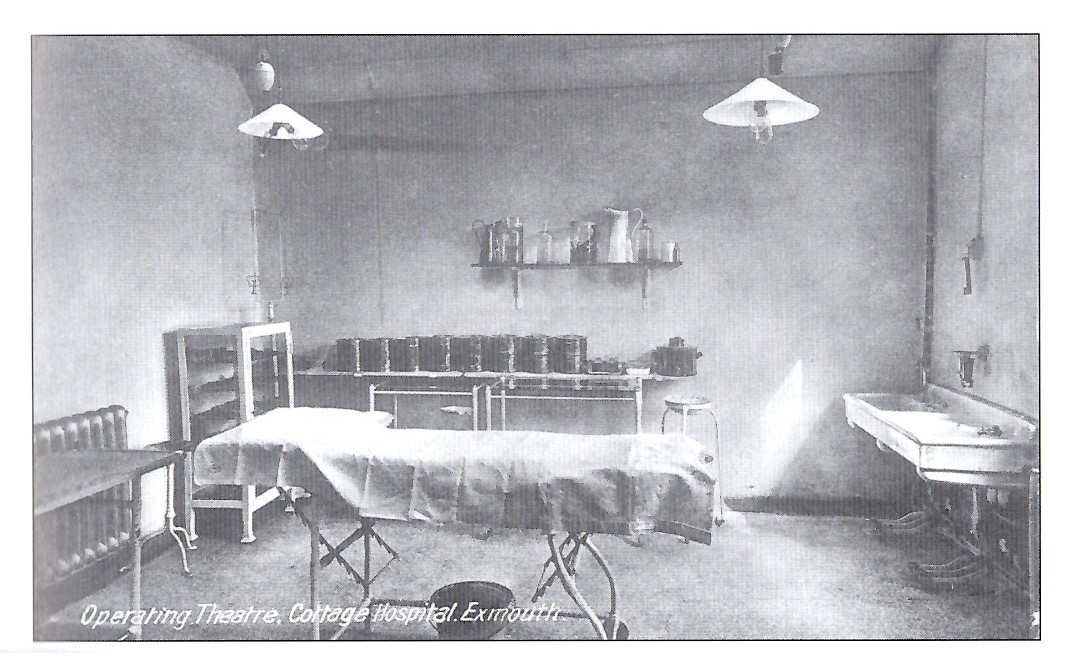 The hospital's gas lighting in the operating theatre and wards was replaced by electricity in 1906 and X-ray equipment was installed in 1912. In 1916 there were a number of changes to the layout of the hospital which enabled some additional bedrooms to be made available upstairs.

In 1925 it was decided that with in-patient numbers increasing year by year there was a need to expand the hospital. Plans were drawn up for an extension to provide a number of new facilities including a new operating theatre, children’s ward, X-ray room, surgery, and private wards. In 1928, a gigantic bazaar raised £3,800 for further expansion of the scheme, which then provided for a major extension. The foundation stone for the new extension was laid in October 1929 by Lady Clinton and the building work was carried out by local contractor F. J. Greenaway. In May1932 Lord Exmouth opened the renamed Exmouth Hospital which had changed its appearance and doubled in size.

Since the early days of Exmouth Hospital there have been many developments and improvements to provide a wide range of NHS services for the residents of Exmouth and the wider community. 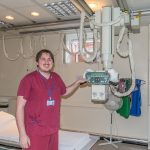 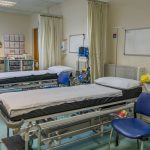 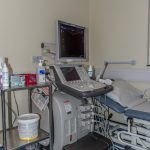 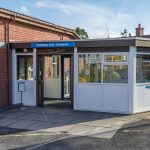 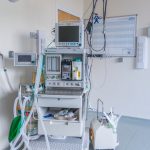